Enjoy your holiday in Grimaud, with it's castle, cosy center and flea market.

Grimaud is a village in the Var department, on the French Riviera, located 15 kilometers from both Saint Tropez and Sainte-Maxime. The village is probably named after Gibelin de Grimaldi, who received the land as a gift from William 1 of Provence for his help with the expulsion of the Saracens. The name Grimaud is mentioned for the first time in deeds relating to the castle, Castrum de Grimaldo, which was actively used until the French Revolution, and of which the ruin which has been partly restored is worth a visit. 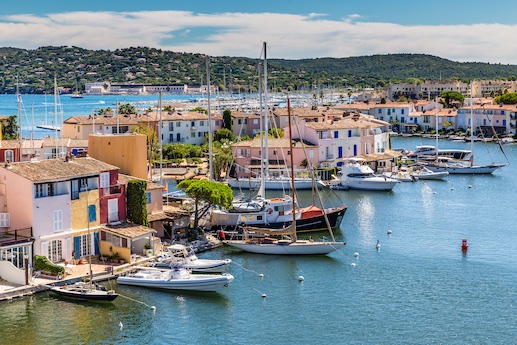 Holiday homes for rent on the Grimaud 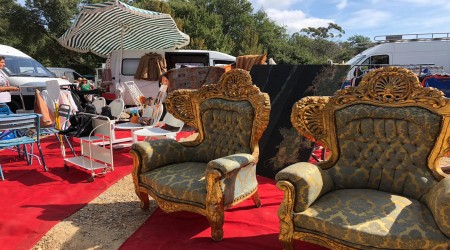 Every Sunday morning the flea market, Le Marché de Puces, is held on site at Le Jas des Roberts. Hundreds of suppliers show their goods there, ranging from art, furniture, clothing, books, jewelery and cutlery. There is something to suit your taste in every price range, so keep in mind that you can spend a few hours of pleasant time with a visit. Many people therefore also want to drink a cup of coffee or a glass of rosé at the restaurant of Le Jas des Roberts. 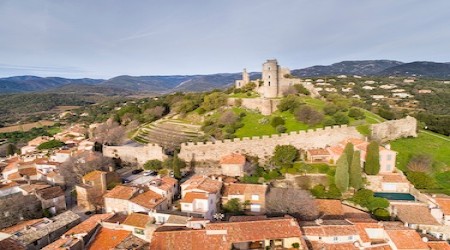 Documentation about the castle of Grimaud dates back to the 11th century, although the castle itself was only built at the end of the 12th century. The castle is located at the top of a hill with stunning views over the Maures mountains, and the bay of Saint Tropez. The last inhabitant of the castle was the Castellane family, who fled from it when the castle was destroyed during the French Revolution. Nowadays you can visit the ruins, of which one room is reasonably intact. 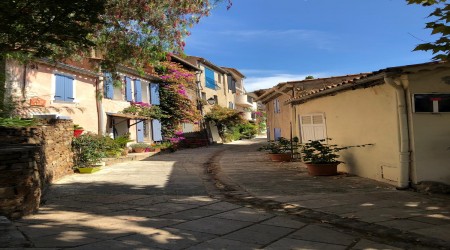 The historic center of Grimaud is certainly worth a visit. If you come by car, there is a parking lot at the entrance to the village, and from there you can walk easily, albeit a little uphill towards the church, the Eglise St. Michel, whose first documentation dates back to the same period of time as the castle, namely the 11th century. The church itself, however, dates back to the 19th century, and is certainly worth a visit. From there you walk through all the picturesque streets partly paved with cobblestones, and enjoy the cottages covered with bougainvillea plants. Tired of the walk, you can enjoy lunch in one of the various restaurants. 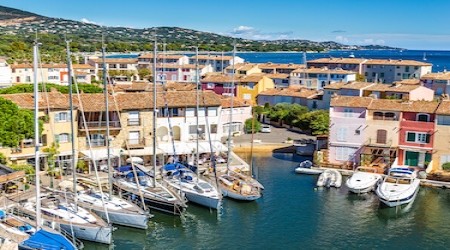 Port Grimaud was created by the vision of the architect Francois Spoerry, who decided to build a house on the marshy land near the river La Giscle. This soil was originally used for agriculture. He wanted to be able to moor his boat near the house, and once the house was finished he got a vision of a village with houses that all had the possibility to have a boat moored. The idea for Port Grimaud was born. Today, Port Grimaud has 12 kilometers of quays, a private beach, and the possibility of numerous water sports such as water skiing, sailing and diving. 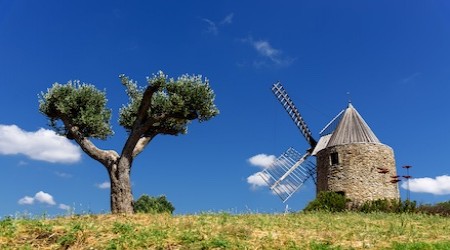 The mill of Grimaud

The mill of Grimaud

The mill of Grimaud, Le Moulin Saint Roch, is a mill to grind grain, and dates from the 17th century. At the time it was known as Le Moulin de La Gardiolle. In 1990 it was completely restored by the architect Hubert Lemonier. The mill does not function due to a broken part. You have free access to the mill. 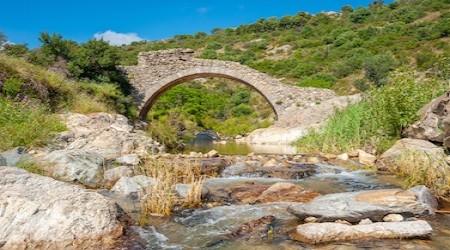 This ancient aqueduct dates from the 16th or 17th century, and spans the river Garde. The aqueduct transported a pipe over the river in order to guarantee the drinking water supply of Grimaud. The surroundings of the bridge are characterised by the beautiful nature, wonderful for a walk.

The first mention of Grimaud dates from around the year 1000, when the land between Grimaud and the current Saint Tropez was donated to Gibelin de Grimaldi by the count of Povence Willem 1 for his help in driving the Saracens. The castle, the Castrum de Grimaldo, dates back to this period. The castle is slowly being extended, and at the beginning of the 14th century the castle becomes the property of the Pontèves family. In the following 3 centuries, the castle becomes more and more important, until the port of Saint Tropez starts to play a more important role, at the expense of the castle's role, which is becoming less and less interesting for trade. During the French Revolution the castle is destroyed, and the owners flee to Nice. Since 1980 there are various restoration projects.

The number of permanent residents of Grimaud is 4200 in 2017 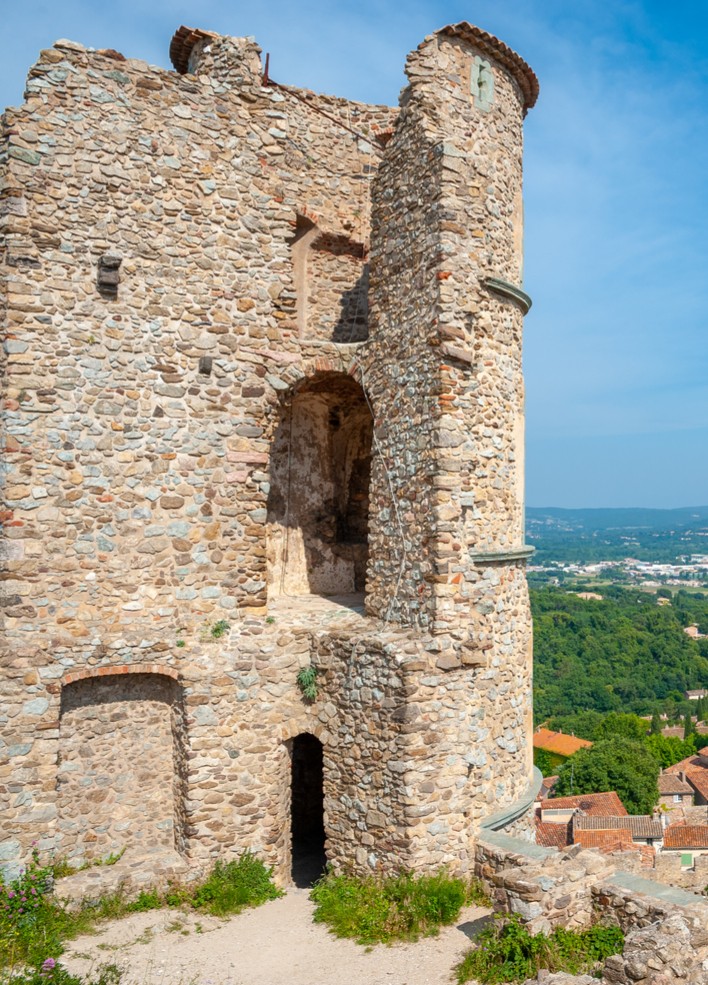 THE PRETTY LITTLE VILLAGE OF GRIMAUD

Wandering through its narrow streets that are filled with colourful bougainvillea and pink and white oleander bushes, Grimaud is a typical Provençal village with numerous little squares surrounded by houses in warm stone colours with red tiled roofs and colourful painted window shutters. The village nestles on a hillside between Saint Maxime and Cogolin on the French Riviera and is surrounded by unspoilt countryside. Whilst it lies just a few kilometres from Saint Tropez in distance, Grimaud could be a thousand kilometres away with its sleepy ambience where time is measured in lengthening shadows and the passing seasons. The village has a long history that can be traced from AD 973 when Gibelin De Grimaldi helped William the Good drive the Saracens of Fraxinet from the area. Grimaldi was rewarded with a large piece of land at the head of the Gulf of Grimaud (now known as the Gulf of Saint Tropez). In the early 11th century, Grimaldi built a castle on the hillside at a height of 503 metres to help defend the south coast and slowly a small community developed there and prospered. The castle walls were added in the 13th century and in times of war and plague provided safety to the villagers who retreated within them. Since then the lovely rustic village of Grimaud developed below the castle and was little known until the 1930s when Saint Tropez and its surrounding areas were 'discovered' by artists, dress designers and celebrities. Somehow, Grimaud has managed to stay as a relaxing back water with little change – probably thanks to the sizeable Port Grimaud development down by the coast. The perfect way to enjoy discovering Grimaud and soaking up its atmosphere is on foot. The newest square in the village is aptly called Place Neuve although it was actually built in 1886! 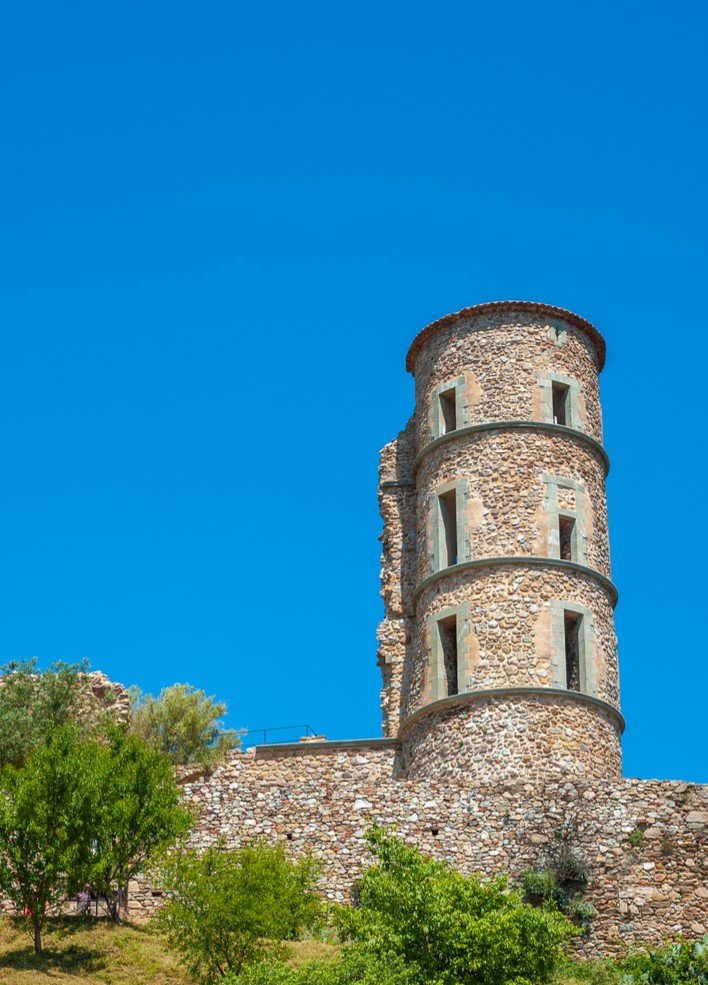 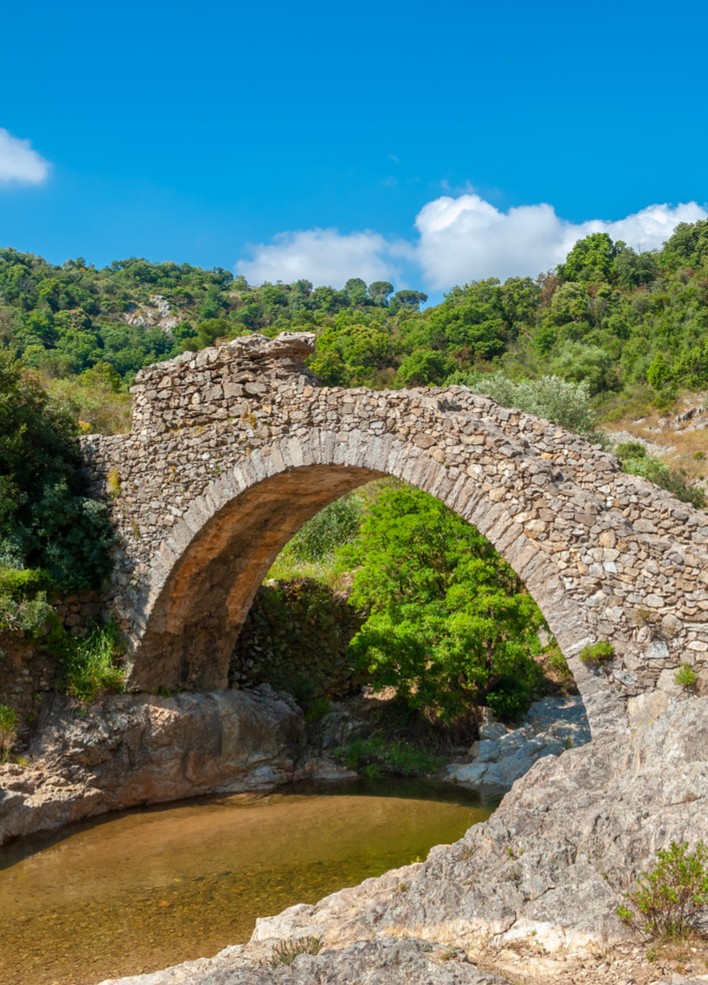 The panoramic view from the castle is magnificent as it is over the red tiled roof tops of the village and the unspoilt countryside in one direction with the wooded hillsides of the Massif des Maures on the horizon and the beautiful azure waters of the Mediterranean in the other. After a day exploring Grimaud, what better than relaxing over a tasty meal? There are several different restaurants to choose from including Fleur de Sel which has plenty of local dishes on the menu and a take-away service and Les Santons which has been family run since 1962 and is a popular watering hole with visiting politicians and celebs. There are a number of delicious local specialities to try including anchoiade which is a tasty sauce of anchovies and olive oil and Tapenade, the classic Provençal dish of chopped olives and capers mixed with olive oil – both are delicious hors d'oeuvres. The most popular olives in the area are shiny, oval black olives called La Cailette, whilst Pissaladière is pizza with a local twist! Honey from Provence is held in high esteem as it is said to be really pure and flavoured by the numerous summer flowers. The village has several charming holiday houses and villas for holidaymakers and many of the visitors to Grimaud return time and time again because it is as relaxing and tranquil or action-packed as you want to make it!.There are several traditional markets to enjoy in the village. On Thursdays there is a colourful selection of stalls piled high with fresh produce, flowers and an assortment of Provençal products. Every Sunday, there is all the fun of the popular Jas des Roberts Brocante (flea market). If you are an early riser, this morning market begins at 06.00 when it is surprisingly busy with bargain hunters! Each stall is different and filled with all types of interesting articles including old stamps and First Day Covers, old coins, pieces of handmade lace, old silver cutlery, glassware and various copper and brass items.

A little further afield, there are markets in Port Grimaud on Thursdays and Sundays and twice weekly in Saint Tropez and Saint Maxime (full details from the tourist information office in the village). For those who enjoy simply relaxing in the warm sunshine with a good book, there are numerous little corners to rest awhile before going for a leisurely coffee. For walkers there are some interesting routes from the village that follow various footpaths that are hundreds of years old including a particularly beautiful one that takes walkers along the Valley of the Pont des Fées – this pretty arched stone bridge is in fact an old aqueduct. Many of the walks follow glistening streams in the local countryside. For those who prefer to stretch out on a beach, there are a number of enticing sandy beaches – both private and public- down at the coast and several have a variety of water sports too. Le Petit Train leaves Place Neuve in the village to make the one hour scenic journey down to Port Grimaud and is well worth catching as it makes a fascinating contrast to village life! Port Grimaud is a large marina with candy-coloured houses and the nickname 'the Venice of Provence'. It was designed by the architect François Spoerry in 1962 and was built in three phases. The architect's vision was to create a waterside community where each property was built in the local character with both a garden and a boat mooring. The complex covers 75 hectares and has seven kilometres of canals which connect the 2,400 homes and 2,000 boats. Slightly further afield, the village of Cogolin is situated five kilometres away and is lovely village with the fascinating Courrieu pipe workshop just near the centre. There are hundreds of beautifully hand carved pipes made from local materials such as briar roots and the designs include carved faces of many famous people. 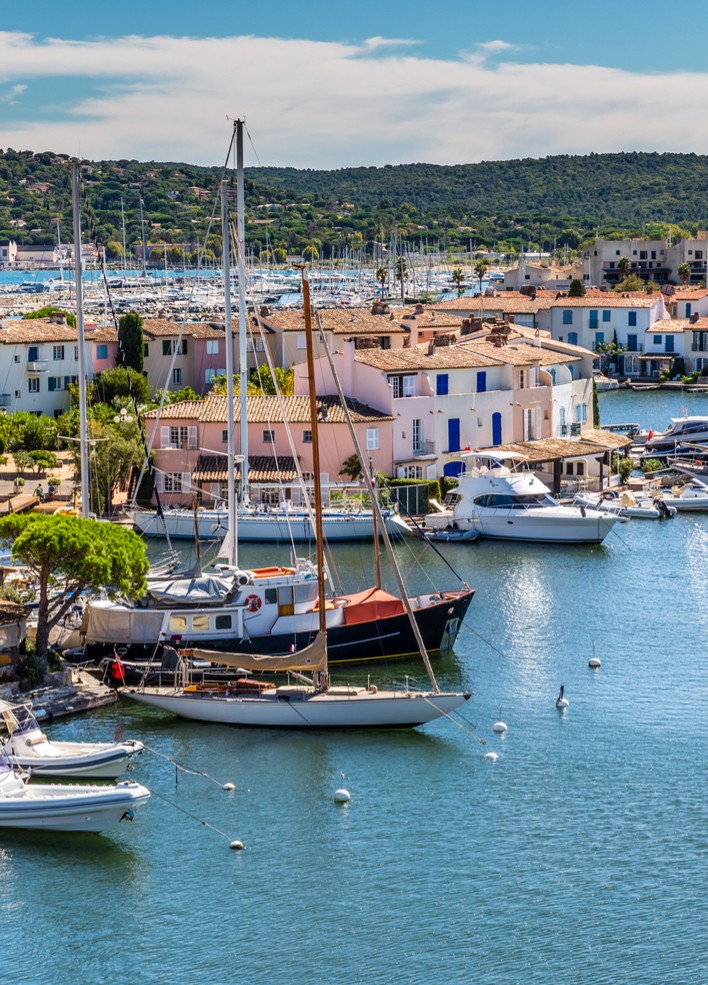 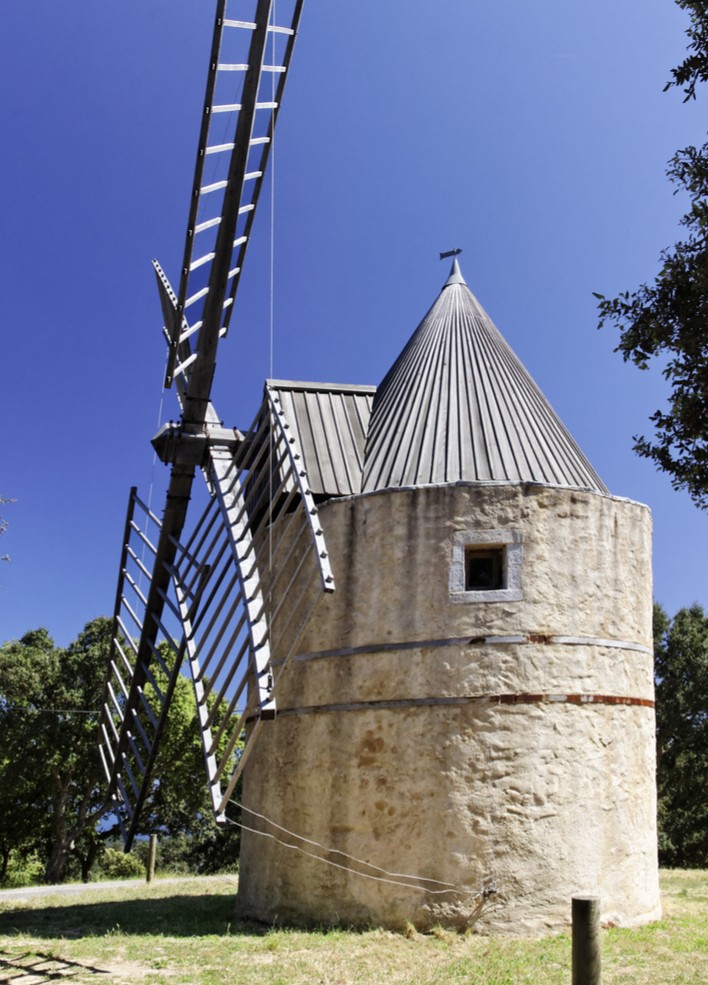 The pipes are on sale and very reasonably priced. The village also has a botanical park with 34 local species, other villages to visit include Ramatuelle and Gassin. For keen golfers, there is a beautiful and varied 18-hole course at Beauvallon, just on the western outskirts of Grimaud and the town of Sainte Maxime lies just 12 kilometres away in the same direction! The mountains of Massifs des Maures beckon keen walkers and cyclists and a popular village in these mountains is Collobrières which is well known for its candied chestnuts. Grimaud is a delightful village to visit at any time of the year and for its size has a surprising number of fun events to enjoy. The year begins with the 'Salon des Peintres' which is a one-week event held each April and September. The popular wool fair takes place on Ascension Thursday and the Feast of the Mill follows the following month in June. Bastille Day on 14 July is celebrated throughout France and just a few weeks later, Grimaud looks its best for its own village festival. A popular event that takes place regularly throughout the year is Les Soirées Musicales de Grimaud' which are wonderful classical music concerts. Walking through the charming, narrow flower-filled streets of Grimaud and pausing for a plate of freshly made tapernade and a glass of chilled French white wine as you sit in the golden sunshine of Provence, it is hard to imagine a better place to enjoy a holiday..., 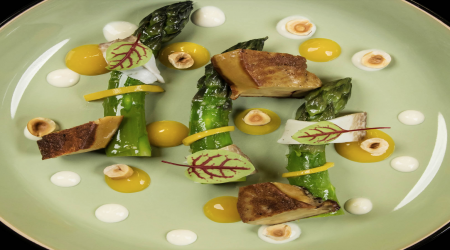 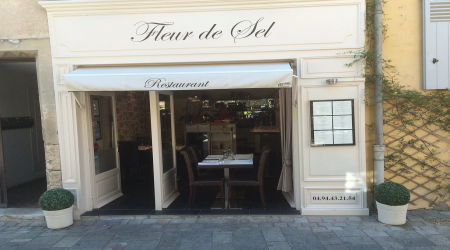 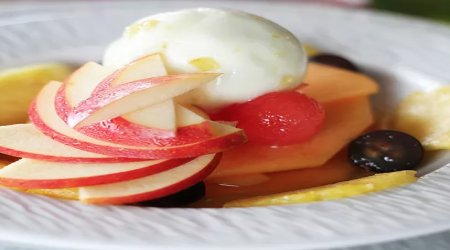